This group started in 2020 during the COVID 19 pandemic by two members who lived in the Okanagan Valley of British Columbia, Canada. The global response of the Fellowship of Narcotics Anonymous resulted in a surge of online meetings. Many members with a desire to carry the message to those who suffer from the disease of addiction joined this group and our membership continues to grow.

Narcotics Anonymous sprang from the Alcoholics Anonymous Program of the late 1940s, with NA meetings first emerging in the Los Angeles area of California, USA, in the early 1950s. The NA program started as a small US organization that has grown into one of the world’s oldest and largest international organizations of its type. For many years, NA grew very slowly, spreading from Los Angeles to other major North American cities and Australia in the early 1970s. Within a few years, groups had formed in Brazil, Colombia, Germany, India, the Irish Republic, Japan, New Zealand, and the United Kingdom. In 1983, Narcotics Anonymous published its self-titled Basic Text book, which contributed to its tremendous growth; by year’s end, NA had grown to more than a dozen countries and had 2,966 meetings.

Today, Narcotics Anonymous is well established throughout much of North and South America, Western Europe, Australia, the Middle East, New Zealand and Eastern Europe. Newly formed groups and NA communities can be found scattered throughout the Indian subcontinent, Africa, and East Asia. Today the organization is truly a worldwide multilingual multicultural fellowship with more than 58,000 weekly meetings in 131 countries*. Narcotics Anonymous books and information pamphlets are currently available in 39 languages, with translations in process for 16 languages.
*As of May 2010

Times below are in Pacific Standard Time – check Meeting Times for a timezone adjusted meeting time for your area. 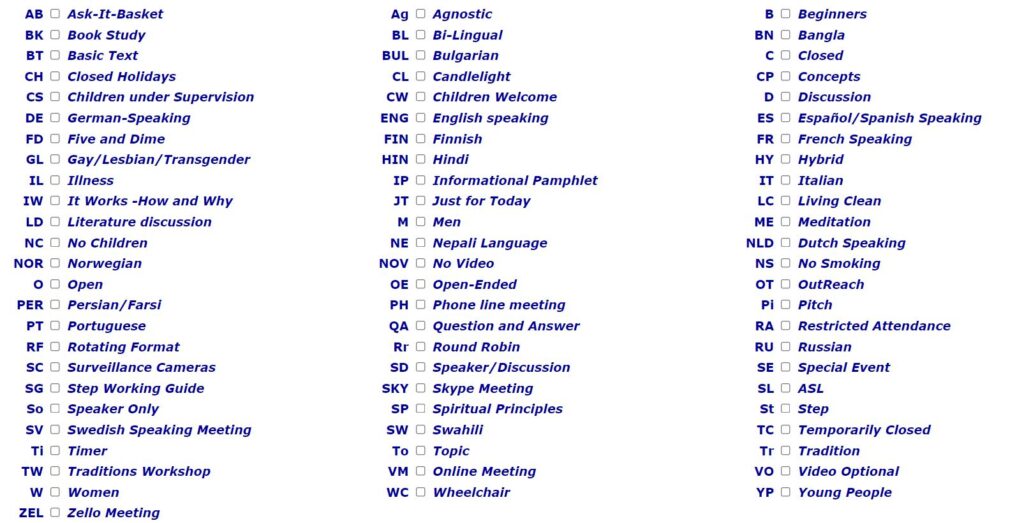